Edit: January 2023 – I sold this monitor to a friend of mine and, after a few months (and maybe a Windows 10 update) his PC began freezing when the monitor would go to sleep and come back on when there was something plugged into the USB 3.0 hub. Removing the USB plugged into the monitor solved the issue.

This post doesn’t really have much to do with music, streaming, gaming, painting D&D miniatures, or anything else that I use this site for. Heck, it might not even show up on any Google searches, but in the event someone is faced with the same situation I was, I wanted that person to know they weren’t alone.

Spoilers: I no longer own the monitor, but a friend of mine does. In the end, it did not fit my situation, but it did his. While I can’t currently get any additional info about it, it is possible that I can at some point in the near future.

I recently decided that I wanted to upgrade the secondary monitor of my gaming PC from a basic 1080p monitor (an underrated BenQ GW2480) to a 27″ 1440p monitor. Sometimes I move windows around and moving from a 1440p monitor to a 1080p messes with my brain. Off to the local Facebook Marketplace I went.

Lo and behold, within minutes, I found someone local selling a Monoprice 27″ 1440p monitor for $120. That’s pretty solid for a 1440p monitor, even if it had pretty basic features. It had a displayport and HDMI inputs, a USB-C slot which powered two USB 3.0 slots, and a 60hz refresh rate. Nothing great to write home about, certainly not a primary gaming monitor, but as a secondary monitor for browsing the web, doing something in Office, or even watching some basic youtube videos? Yeah, that’s solid.

I asked the seller for some details but they weren’t able to really provide much. They didn’t have a model number, didn’t know if the monitor was VESA-compatible, but I was undaunted. The picture he sent of the back of the monitor LOOKED like the stand came off. There was even a little switch that looked like it’d be the way to get the stand off. Off my wife and I went, money was exchanged, and I brought the monitor home.

The label on the back of the monitor listed the model number as W1-270AH. There is absolutely zero info on any Monoprice monitor with that model number. I can’t find a manual so I realize that I’m on my own to determine any and all information about this monitor. That’s why I’m making this page. Perhaps someone else might stumble upon this and this might be of help to them. I did actually find one result with pictures that matched the monitor, but I couldn’t access the site, which was not related to Monoprice.

Did Monoprice simply slap their label on a cheap-o monitor? Probably. 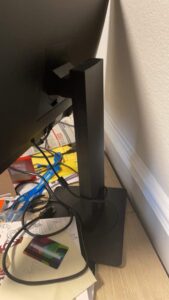 I’m not going to lie, it’s a decent stand. The monitor itself is already heavier than my other monitors and the stand adds a decent weight to it. There’s not much to being able to angle up or down and raising/lowering the monitor on the stand was a bit too easy to do. I prefer even just a little resistance, but once it was in place, it stayed there…as long as you didn’t touch it.

That little switch looking thing at the bottom of square? It definitely removed the stand. There are three pieces that slide into the monitor itself and then it clicks into place.

Here was the dealbreaker for me. Underneath where stand attaches are four screws. That makes you think it’s VESA-compatible, right? It’s not. The holes are wider than 100×100. It might be 110×110 or something. I couldn’t mount it on an arm and, with my setup, that meant I couldn’t make use of it. 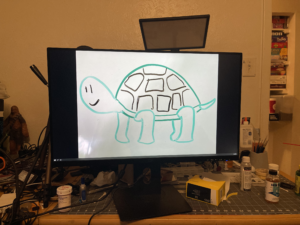 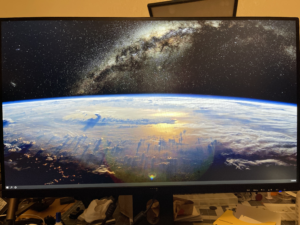 Ignore the messy D&D painting area. There are pictures of two different backgrounds. I didn’t have a monitor review in mind when I took them. Instead, I was taking them to show the friend that now has the monitor a) that it worked and b) what the picture looked like. Is it the greatest pictures I’ve ever seen? No, but the blacks looked good, especially in the picture of the turtle that a friend on Twitch drew me, but also in the picture of earth.

When I set it up at his house, he still has the basic Windows 10 background. The blues weren’t entirely uniform and there were some splotchy colors, but it still looked good…solid B. I didn’t see any weirdly darker or light spots, terrible backlight bleed, or anything else you normally read people talking about in monitor reviews. There were no dead pixels. It was what I expected it to be.

As I mentioned at the top of the page, it has a DisplayPort and HDMI input. What you see in the pictures of the screen above is via DisplayPort. When I got it to my friend’s house, I tried hooking up a DVI to HDMI cable into the HDMI port, but the monitor wouldn’t recognize it. Plugging an HDMI cable fixed that problem. I did confirm the DVI to HDMI cable was bi-directional, but I could see this monitor being finicky about it. My friend isn’t a gamer and he has an MSI 770 Twin Frozr 2GB card. The HDMI out on that card put out a 2560×1440 60hz picture without an issue.

I’m not sure if the USB-C could power a monitor, but I did confirm running a USB-A to USB-C cable to the monitor did power the two USB 3.0 jacks and I even powered a Logitech C920 webcam from it without any issue into Discord. I know…super scientific testing, right? The picture coming from the webcam was smooth and without hiccups, and I figure that’s what the typical consumer is looking for.

The monitor does not have an internal power brick, so the DC port is a typical barrel-plug. I do worry about the ability of the plug to stay plugged in since I barely tugged on the cable and it came unplugged, but a little electrical tape could solve that problem.

Yeah, I didn’t think to mess around with these. The button labeled “exit” was how I was able to cycle through the different inputs. Now that I think about it, there were three inputs available, so perhaps the USB-C could power a monitor…that or there’s a VGA input. I honestly can’t remember. The buttons definitely had a good, clicky, tactile feel to them. What I did see of the menus and navigating them would be clunky at best. Fortunately, the picture looked pretty good with the standard settings so I didn’t mess with them too much. Perhaps next time I’m over at my friend’s, I’ll give it a whirl.

While I was disappointed with the whole stand/VESA mount situation, my disappointment was my friend’s gain. The monitor had a solid picture, DP and HDMI inputs, and had some heft. It’s going to work great for him.

The seller said he paid $200 for the monitor. For that price, I’ve seen monitors from known manufacturers for that price or less pop up on /r/buildapcsales on Reddit, like the refurbished Acer KW272u (W stands for Wal-Mart…it’s apparently the same as the Acer KA272u) I ended up buying for $150.

Would saving $30 and having this one work out have been a better situation? Sure, but in the end, my friend ends up with a solid monitor, I got to have a little monitor adventure, and if someone finds this and is able to make use of it, even better.