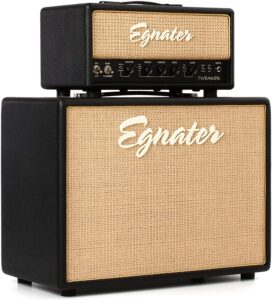 In 2009, my wife was involved in a car accident that resulted in a broken wrist, and she received a decent settlement from the other driver’s insurance. My wife directed me to the local Guitar Center and let me pick out whatever guitar I wanted.

I took that guitar into the isolation room and had my pick of a few amplifiers. Rather than choose a REALLY expensive one, I chose a modestly priced combo and spent a good two or three hours playing this guitar through it.

That’s how I discovered the Tweaker.

At the time, I owned a Fender Deluxe Reverb Reissue. It was, and still is, a really well thought of amp, but it’s a 22-watt tube amp. It’s a single channel amp and has to get pretty loud before it starts to naturally distort.

The Tweaker, on the other hand, had the option to flip a switch and overdrive the amp. At this time, I really hadn’t developed a sickness for pedals and this was something I very much desired.

Coupled with playing it relatively loud (something that I would NOT be able to do in the apartment we lived in), it sounded absolutely great. It would still sound good at bedroom levels, but there’s no comparing a tube amp at bedroom volume to cranking it loud.

Why is it Called the Tweaker 15?

The reason it’s called the Tweaker 15 is that there are switches that change the tonal profile of the amp. Eventually a second, 40-watt model was released and as this one is 15-watts, it became the Tweaker 15.

The switches on the amp do the following:

What Do I Mic it With?

I use a Sennheiser e609 dynamic mic. It is mounted on an arm attached to the leg of the shelf to position the mic in the middle of the speaker.

The e609 is a popular mic that you might see hanging by a mic cable in front of an amp’s speaker.

Is it a Keeper?

The Tweaker is a solid amp that’s served me well for almost 14 years. However, it’s a jack-of-all-trades and, while dependable, is not extraordinary at any one thing. It was replaced by my Princeton Reverb because I wanted that “Fender clean tone” that the Tweaker approximated.

It’s time in my collection came to an end in June of 2022. I replaced it with a Strymon Iridium pedal.

If someone were looking for a solid, serviceable amp to cover a fair amount of ground, I’d suggest it for sure.

In a world of noise, be sound.