The PRS SC245 McCarty Soapbar is probably the “nicest” guitar I own. The color is called “Amber Burst” and might actually my favorite finish of all of the guitars I’ve owned.

The SC in the model name stands for “singlecut” and the 245 indicates the guitar’s scale length of 24.5″, both of which are normally found in the Gibson Les Paul type guitars and not the typical PRS scale length of 25″.

The headstock also shares the headstock of the PRS Santana line and features a flame maple finish as well. The bird inlays of the neck are mother of pearl, and the pickups in my model are soapbar shaped P-90s, which are hotter than a normal single coil pickup but do not eliminate the 60-cycle hum like humbuckers do. Mine also features a “10-top” which is how PRS describes the more prominently figured flame maple top. 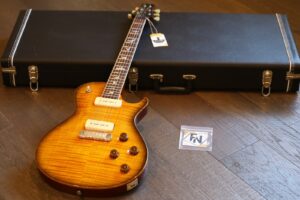 Back in 2009 or early 2010, I was more or less still at the start of my journey into the larger world of buying nicer guitars than your lower-mid level Fender strats or Epiphone Les Pauls.

I think I’d bought and traded a nice Fender American Standard from a guy off of The Gear Page because it smelled like smoke (which I was able to finally get rid of) and it would one of many strats I’ve owned and been unhappy with.

My wife had been involved in an automobile accident and broken her wrist. As she was not at-fault we sued the insurance for damages.

Eventually, we were awarded a decent sum of money (something we should have been smarter with). She told me, “Go to Guitar Center and buy any guitar you want, within some reason”. I had the opportunity to buy basically any guitar I wanted outright.

It Hung Upon the Wall

I remember seeing this really cool looking PRS, similar to the picture in the previous tab, in the nearby Guitar Center for some time before I had the means to consider buying it. It hung at the very top of the used wall, well away from the grubby hands of teenagers and bedroom players to simply just grab and play.

I’d wanted a proper PRS for years. I’d bought an SE Santana and SE Soapbar before, but ended up selling them both, but it never quite scratched the PRS itch. Looking back, that Soapbar model, which was a singlecut as well, was a REALLY nice guitar for the $300 I paid for it.

I asked a sales rep to play it and they got the rolling ladder to get it down for me. They actually suggested I play in the small room where all of the REALLY nice (aka expensive) guitars were. There was an Egnater Tweaker 15 combo amp in there and as that was closest to what I had at home (a Fender Deluxe Reverb Reissue), I choose it. Interestingly, this guitar and my experience with that amp led me to buy the head and cap version of the Tweaker and hold onto it for almost 14 years.

Yeah. That guitar was magical. I loved the singlecut shape (I’d later discover that I’m more of a Les Paul and Telecaster guy), the pickups were so clear and articulate, and rolling off the volume cleaned up the natural break up I was getting out of the Tweaker.

I wrote two songs then and there in that room, though they are songs that remain unfinished to this day. Sometimes, a certain piece of gear just lends itself to writing new music and this guitar definitely did that. I think I played that guitar for two hours before packing up and going home.

Somehow, I was able to exercise restraint and not immediately purchase it. That was smart on my part. I told the sales rep that I’d be back the next day and that I needed to sleep on it. Most of the time, I assume that most sales reps would think, “Yeah, OK, sure…tire kicker” but I’d spent enough time at this GC, and spent money, that they knew me well enough to know I’d keep my word.

Back the Very Next Day

True to my word, I was back the next day. Now, while I give myself credit for at least sleeping on it, what I should have done was check out some of the Gibson Les Pauls in the same price range. I might not have been able to afford a Les Paul Standard, but I’m sure there would have been some nice offerings available. However, I did not do that. I was enamored with that guitar.

I went back into the room and played more. I honed the two songs I’d written and finished arranging them. At one point, a kid who was, at most, 15 came in and listened to me play. At one point, he asked me “What song is that? Can you teach it to me?” and I told him it was something I’d written. He thought that was the coolest thing.

I didn’t teach him how to play it.

Yeah, for some reason, I was paranoid that he’d steal it and make it his own song. Stupid me. Here I was, some bedroom player that some kid thought was cool and wanted to learn. I should have been humbled, I should have encouraged him by teaching him the song, but I was a selfish jerk about it. “I’m still working it out” was my response. Blech.

I played that thing for another solid two hours and took it up to buy it.

This PRS SC245 McCarty was easily the most expensive guitar that I’d owned, and that remains the case to this very day. While I paid the same retail price for my Gibson Les Paul Classic and PRS McCarty 594, I bought this one used for that price.

The P-90 pickups would prove to be this guitars downfall, as they were incredibly noisy and made recording the type of music I tend to write a bit tricky. P-90s might lend themselves to better sounding overdriven tones, they are still quite susceptible to noise. Eventually, I’d obtain a PRS Singlecut with humbuckers and this guitar would sit in its case in the closet for five or six years.

At some point, I pulled it out and, while the strings were definitely old, the guitar played as well as if not better than every other guitar I owned. I’d had Big John set it up when I first bought it and, all of those years later, even after two moves and six years, the setup was still solid.

I used it to record the rhythm guitar for “So Far” on the Cold the Winter EP. The end section with the tremolo from my Princeton Reverb still sound really good to my ears. It handled the overdrive in that song really well. I kept the drive low because it fit the song, but also because of how noisy those pickups were.

Unfortunately, the SC245 has received some significant damage over the years. I’ve been the cause of some dings and dents here and there, which happens to the best of us, but some of the damage was not my direct doing.

Part of the gold lettering in the Paul Reed Smith signature was broken off. This damage has been in place for years and I believe it’s from a friend mishandling the guitar.

The back of the guitar has some pitting from a Pro line A-frame guitar stand. The foam that protects the guitar from these sharp bits of frame was worn and moved to the side allowing the sharp bits to dig into the guitar. This went on for months before I noticed, but the damage was done.

I also left the guitar out in a stand where our daughter, as a toddler, was able to get at it. There are a couple of dings that broke away and show the raw wood underneath.

I checked into a refinish, and perhaps a different color burst (like a blueburst), but that would run $500-$900, money I simply do not have to spend on something that is aesthetic. I’d definitely lose money if I sold the guitar because of this damage, but fortunately life hasn’t come to that point yet.

Maybe one day this one will get restored to its proper aesthetic appearance.

Earlier in 2022, I took the guitar back to Big John to see what he could do about the noise. He took the guitar apart and was surprised that there was no shielding paint in the cavity. He put in some copper tape, worked his usual magic, and now the guitar is pretty quiet for a P-90. Yeah, it still buzzes with a lot of drive, but so do my humbucker guitars because this house’s wiring is garbage.

I’ve used it more on the newer songs that will make up Volume Four and it will continue to be used on upcoming recordings, especially if I can fade the parts out before the buzzing kicks in.

In spite of a setup that took place well over 10 years ago, this guitar still feels better in my hand than any other guitar. There’s something to be said for the level of detail that went into the construction of this guitar. Sure, heftier prices are often the cost of aesthetic choices, and I have no doubt that those factors play into what this guitar cost new.

That being said for a guitar to sit for years in a case and play amazingly well without anything being done after taking it out shows just how much of a difference a company’s QC and a good set up can make.