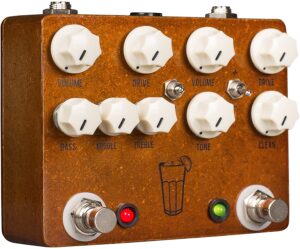 Disclaimer: I have read about the internet backlash against Josh Scott, founder of JHS Pedals). I have also read his responses to the whole thing.

People get invested in some interesting things on the internet. Sometimes, the cases for those things are incredibly compelling, sometimes there’s tidbits of truth to the whole thing, but other times  people buy into conspiracies, rumors, and flat out fabrications because it fits a narrative they have in their mind and/or an idea they can get behind.

Whether it’s JHS Pedals, politics, the moon landings, or God knows whatever else…we have to be able to take a step back and look at something from a wider perspective. I have done this and chosen to give Josh the benefit of the doubt.

If you disagree with me and that means you want to part ways from whatever projects I’m a part of, I completely understand and accept that. Choice is something I very much believe in and I’m all for your ability to make said choice. I also believe in trying to be objective. Sometimes being objective means accepting that you’re going to be treading in some definite gray areas that others might not be on board with. I’m OK with that.

My journey to the Sweet Tea started with the JHS Double Barrel. Maybe I saw one for sale on the local Craigslist, or on The Gear Page, but it piqued my interest. I mean, two drive pedals in one and only requiring one adapter? Count me in.

I called up Nich Magnani (give him a call…he’s awesome) and talked to him about the Double Barrel because Sweetwater was doing 48 month/0% financing. He asked some questions about my gain needs and after going back and forth, he suggested the Sweet Tea instead. That was 2017. It was my 39th birthday. I pulled the trigger.

I owned the Sweet Team for almost two years. In my opinion the pedal worked better with the right side being first and kind of set up as a clean boost. It’s how I used to run my Fulltone OCD v1 into my old Zvex Box of Rock. I’d use the boost side of the BoR to sweeten up the OCD. It sounded awesome. I pulled the gain way back on the Moonshine, cranked up the clean knob to about noon, and then kicked on the Angry Charlie. If I roll some of the clean off, I can get some wicked feedback even at bedroom levels.

I used both sides of the Sweet Tea on every track on Skylines and the Horizon and I don’t regret it. Would I have used it differently? Sure, but I can’t fault the pedal for the choices I made.

Here’s an Andy demo from his ProGuitarShop.com/Tone Report days. If I can find an Andy demo, I’m going to link it.

Why Did I Replace It?

Most guitarists that venture into the world of pedals have the same problem: The grass is always greener. There’s always another pedal that some pedal demo dude (Andy from Reverb is wonderful at this) that makes some new pedal sound amazing! I stumbled across a video of the Wampler Pinnacle Deluxe and Brian Wampler using it to play Pearl Jam’s “Alive”. It sounded spot on. I ordered it immediately and the Sweet Tea moved on to another musician’s board. I kinda miss it.

Absolutely. The Angry Charlie v3 is a damned good pedal. The Moonshine is based on the Tubescreamer. It’s hard to go wrong with both pedals in one enclosure. It’s pricey, sure, but when I grabbed the picture on this post from Amazon, there was a used one for just over $220. Assuming it’s not destroyed, that’s a great deal.