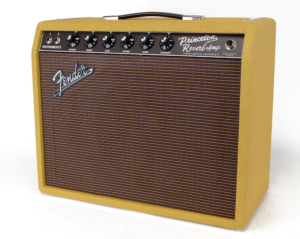 I came back home to the tone of a Fender amp after years of being OK with the Egnater Tweaker’s approximation of it. Before the Tweaker, I’d owned a Fender DRRI, or Deluxe Reverb Reissue.

When I began looking at Fender amps again, I found the Princeton Reverb, which is the DRRI’s little brother at 15 watts. It still has the tremolo and reverb that these reproductions of vintage Fenders have…something sorely missed in the Tweaker.

The Princeton Reverbs generally have a 10″ speaker and a smaller cabinet. I happen to prefer the slightly bigger sound of a 12″ speaker, so when I stumbled upon the model you see above on Sweetwater’s site, I was immediately interested.

While 15 Watts isn’t all that much quieter than the 22 watts of the DRRI, but it has less “headroom”, which is to say the sound starts to dirty up sooner. At this point, we lived in a house and I could crank the amp when the family was away.

Did I mention that 15 watts is loud?

What About a Vintage Princeton Reverb?

I think the short answer is: Yes, absolutely 100%!

The long answer is that vintage amps are getting to be more and more expensive. Perhaps I will one day own one.

A few years ago I became attached to the idea of owning a Les Paul or Fender guitar from my birth year. Within the year of that idea, I ended up buying a Fender Vibro Champ that a local amp tech confirmed, independently of knowing my desire, that it was indeed from that exact year.

That’s only cemented my desire to own more things from that year, even if the 70s weren’t the most favorable year for guitars from either company. The amps are solid.

It’s a matter of cost and I think that’s what will be the deciding factor. Unless thousands of people discover and start listening to a lot of KCWM music, the continuing rise in value of vintage amps and guitars will be the hurdle I have to overcome..

What Do I Mic it With?

For Waiting Drove Us Mad I used a Sennheiser e609 to mic the Princeton Reverb on “Juilliard” and “Ghost”.

For Skylines and the Horizon I used a Sennheiser e609 coupled with an MXL R144. 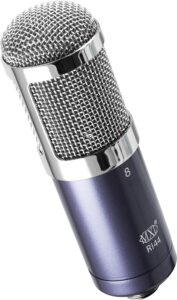 The R144 was a great introduction into the world of ribbon mics, but I wanted to upgrade.

Somewhere in the middle of DMCA-Free Rock: Volume Three, I swapped out the MXL R144 for a Royer R10 and that’s where I currently stand, mic-wise.

The R10 is positioned on the left side of the Princeton’s speaker and the e906 is on the right, and both serve as the primary focus of most guitar tracks I record.

Is it a Keeper?

I have been thoroughly satisfied with the purchase of my Princeton Reverb. At the time, it didn’t break the bank, the tremolo and reverb on it are excellent, and it has been a consistent performer.

If I had to choose one of the three amps I currently own, it would easily be the Princeton. At 15 watts, it’s not an overbearing amp, it compliments any guitar I plug into it, and it takes pedals well.

The Eminence Cannabis Rex speaker is a darker speaker, so that might be the only change I’d make to it, but I’m familiar with that speaker and it gives my Princeton a slightly different sound than most other models with the typical 10″ speaker.

In a world of noise, be sound.