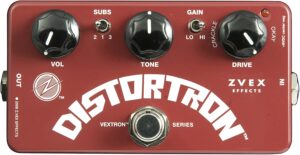 On the primary Pedals page, I talked about the Zvex Box of Rock being the pedal that began my journal into the boutique world of pedals. There was just something about it’s sub-heavy crunch that sat right in the core of my musical soul. It was right as rain.

I used the Box of Rock on the 2011 version of Zombies and really loved where it sat in the mix and how it sounded when isolated. The Box of Rock was an integral part of my movement towards more low and mid-gain sounds. Unfortunately, as things sometimes go, money was needed and the Box of Rock was one of the first, and easiest, things to go. I knew I’d miss it, but I could always buy another one later on down the road.

Somewhere along the line (at least 2011 according to the instruction manual), Zvex released a couple of pedals: the Distortron and the Mastotron, which were in basic enclosures. I’ve never had the chance to play around with the Mastotron, but the Distortron definitely caught my attention. It is the distortion side of the Box of Rock, but with some modifications that adds some versatility to pedal.

For all the complaints the Box of Rock had regarding how bass-heavy it could be, the Distortron features a “SUBS” switch which allows you to dial in less bass. I generally kept mine set on 2, but occasionally set it to 3 to achieve full Box of Rock goodness. The Distortron (and by extension the Box of Rock) are both considered to be “Marshall-in-a-box” (or MIAB) pedals, but are based on an older model Marshall with less gain on tap. The “HI” gain setting fixed that.

A few years ago, I had the opportunity to pick up my Distortron for the awesome price of $54 at a local guitar Guitar Center. I actually didn’t buy it the first time I saw it at that price, partially because it still had the police hold on it (used gear can’t be sold right away in the event that it’s been stolen),  but went back a few days later when I realized just how good a deal it was.

It was the drive side of what might be my favorite drive pedal and it was $54. That was a no brainer

Here’s a classic (circa 2009) Andy from his ProGuitarShop.com days. Man, his demos have come a long way, and this one is still a great representation of what the pedal does.

Why Did I Get Rid of It?

The Zvex Double Rock. That’s why. The Double Rock has two drive channels in one enclosure. It sacrifices the GAIN switch for the ability to switch either side between a drive and a boost AND it has the SUBS switch. This means you can make the Double Rock into a Box of Rock, but cut the subs. You can then stack it with another Distortron engine and get the extra gain. You can make both sides a boost. Or run a boost into the gain. It’s versatile and I was able to get one of the handpainted purple versions. It is my desert island pedal.

I sold the Distortron to JD. He deserves to have a kickass pedal on his board. He has others that he might like more, but the Distortron is like Old Faithful. You know what you’re getting, it’s a classic sound, and it’s right as rain.

Without a single hesitation. The Marshall sound is classic for a reasons. Sure, the horizontal footprint of the pedal might seem awkward, and, sure, it might not have top jacks, but these are minor details. I absolutely love the way the Distortron/Box of Rock/Double Rock sound. If you could get one for the insane price of $54 like I did, you best do it.

Ep3 of #TLOU might be one of my absolute favorite episodes of television ever. That better win some kind of award.