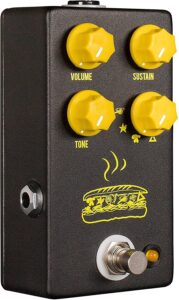 Disclaimer: I have read about the internet backlash against Josh Scott, founder of JHS Pedals). I have also read his responses to the whole thing.

People get invested in some interesting things on the internet. Sometimes, the cases for those things are incredibly compelling, sometimes there’s tidbits of truth to the whole thing, but other times  people buy into conspiracies, heresay, and flat out fabrications because it fits a narrative they have in their mind and/or they can get behind.

Whether it’s JHS Pedals, politics, the moon landings, or God knows whatever else…we have to be able to take a step back and look at something from a wider picture. I have and choose to give Josh the benefit of the doubt.

If you disagree with me and that means you want to part ways from whatever projects I’m a part of, I completely understand and accept that.  Choice is something I very much believe in and I’m all for your ability to make said choice. I also believe in trying to be objective. Sometimes being objective means accepting that you’re going to be treading in some definitively gray areas that others might not be on board with. I’m OK with that.

As a child of the ’90s and someone who grew up on a healthy dose of the sounds of “grunge”, I cannot to deny the way that the wall of sound hits you when the fuzz kicks in on Smashing Pumpkins’ “Today” or “Cherub Rock” off of Siamese Dream. I didn’t really listen to the Pumpkins’ stuff outside of the radio hits, but I’ve chased that guitar tone. If you weren’t aware, that particular sound comes courtesy of an Electro-Harmonix Big Muff Pi, and from what I understand, there are multiple layers of fuzz all across that record.

The Big Muff has been around for some time and there have been numerous versions over the years, the aforementioned Pi being one of them. The Muffuletta is the JHS reproduction of 5 of those pedals, their take on each of them, and their own version of the Muff.

Here’s a video of Andy, formerly of the Tone Report and now of Reverb fame, comparing the settings to the original versions. His demos are top notch.

That’s a great question. For a long time, I didn’t own a fuzz pedal. During one of my pre-Reddit perusals of The Gear Page, a forum post about a few of Danelectro’s line of Cool Cat pedals spoke about how they were actually clones of much more expensive pedals. The CTO-1 Transparent Overdrive was a copy of Paul Cochrane’s Timmy (back before they were available on a production level), the CO-1 Drive was a copy of the Fulltone OCD v1, and the CF-1 Fuzz was a copy of the Frantone Peach Fuzz.

The Peachfuzz was a whopping $300 on the used market and still commands hefty price. The Cool Cat pedals? $35 apiece. Naturally, I ordered a copy of the three above pedals, and before too long, Danelectro had to create new versions of them all.

Once I got the CF-1 Fuzz, I absolutely LOVED it. I was blown away and I began incorporating the fuzz sound in a number of songs, especially on Cold the Winter’s “ALTG”. I’ve never gotten rid of that CF-1.

In 2017, my wife bought me a Les Paul Classic for Christmas and it came with $95 in rewards certificates. The nearby Guitar Center had a used Muffuletta for $140 or something in that neighborhood. I figured it was worth a $55 investment since the gift certificates were basically free money. I got it home, turned on the Pi version, dialed in some settings, and the CF-1 was relegated to the bench. Although I loved, and still love, my CF-1, the Muffaletta did exactly what I wanted out of a fuzz.

The interesting thing about the Muffuletta is that the controls respond differently for each different setting on the version knob. What each control does isn’t consistent between the different versions and requires too much tweaking for a live situation, but I will never play in a live situation again. In the controlled environment of a home studio. I could dial in whatever sound I need, and they all sounded different enough from one another that I had six pedals in one

Why Did I Replace It?

Pretty glowing words, right? In the name of honesty, the Muffaletta found a place to stay on my board because it gave me a Pumpkins-esque sound. It’s an unmistakable sound. Eventually, it made me want to put some distance between myself and that sound and I sold it. I had the ol’ dependable CF-1.

What Do I Use Now?

My primary fuzz (I have three) is a Blackout Effectors Musket Fuzz. The beauty of it? It’s a Muff-clone. Wait a second! Didn’t I just say that I got rid of the Muffaletta for that reason? Yes…why yes I did. The Musket has additional controls that allow you to adjust some of the bigger complaints of the Muff. You can add mids back to the signal, reduce the bass response, and there’s even a knob for a bit of a boost in there too.

Yes. Over the years, aside from the CF-1, I’ve owned a Barber Trifecta, two EQD Hoof pedals, an EQD Park, and a Walrus Audio Jupiter Fuzz v1. Of those, the Hoof is my favorite, but it couldn’t beat out the Muffaletta for me. If you’re a fan of the Pumpkins’ sound, then this is a hard pedal to beat. Now, just as I said at the top of the post, you can get into some interesting discussions about Josh and JHS Pedals. That’s a decision you’ll have to make for you. I didn’t move on from the pedal because of that. I just found something I liked a little bit more.